“”Natural disasters are said to be a national disaster, one of the conditions is if the regional government cannot function anymore,””, check EXPLANATION and REFERENCE section for detail.

(2) Tempo: “Natural disasters in Indonesia are categorized as national and local level. “Natural disasters are said to be a national disaster, one of the conditions is if the regional government cannot function anymore,” said Director General of Social Protection and Security, Ministry of Social Affairs, Andi Zaenal Abidin Dulung, to Tempo on Friday, December 18, 2014.

Andi exemplified the natural disaster of the tsunami that occurred in Aceh in 2004. At that time, the regional government could no longer carry out its functions. Then the central government will send its officers to assist the regional administration.”, check (1) in REFERENCE section for more.

(2) Tempo: “Government Decides Lombok Earthquake Is Not a National Disaster”, check (2) in REFERENCE section for more.

(3) Jawa Pos: “BNPB: No Need for National Disaster Status and Foreign Assistance for Lombok”, check (3) in REFERENCE section for more.

(4) Detik: “BNPB: Smoke Haze Does Not Fulfill All Requirements for Establishment of National Disaster Status”, another example of one of disasters which was not raised to National Disaster status, check (4) in REFERENCE section for more.

(1) Tempo: “This is the Requirement to be Considered as a National Disaster

(photo)
A number of workers worked on the Banjarnegara-Dieng connecting road which was buried after a landslide disaster in Jemblung hamlet, Banjarnegara, December 17, 2014. Workers had dredged four to six meters of land. TEMPO / Aris Andrianto

TEMPO.CO , Jakarta : Natural disasters in Indonesia are categorized as national and local level. “Natural disasters are said to be a national disaster, one of the conditions is if the regional government cannot function anymore,” said Director General of Social Protection and Security, Ministry of Social Affairs, Andi Zaenal Abidin Dulung, to Tempo on Friday, December 18, 2014.

Andi exemplified the natural disaster of the tsunami that occurred in Aceh in 2004. At that time, the regional government could no longer carry out its functions. Then the central government will send its officers to assist the regional administration.

At that time, the North Sumatra regional government sent a letter to the president asking for assistance in handling the disaster. “The Sinabung disaster is a local disaster before the president announces that the status becomes national,” Andi said.

For landslide disasters in Banjarnegara, Andi said the disaster that just happened last week was still categorized as a local disaster. “Local governments can still handle the disaster.”

(2) Tempo: “Government Decides Lombok Earthquake Is Not a National Disaster

(photo)
Aerial search for victims under the ruins of the Jamiul Jamaah Mosque, which was damaged by the earthquake, in Bangsal, North Lombok, NTB, Wednesday, August 8, 2018. More than 200 thousand people were displaced by the earthquake. ANTARA / Zabur Karuru

TEMPO.CO, Jakarta – The government has decided not to raise the status of the earthquake in Lombok, West Nusa Tenggara as a national disaster. Handling is still left by the regional government but presidential regulation (Peraturan Presiden, Perpres) will be issued regarding support from the central government.

“The Perpres umbrella will be prepared for that. Although this disaster is still being handled by the local government, but all support, will be fully given by the center,” said NTB Governor Tuan Guru Bajang (TGB) Muhammad Zainul Majdi after a meeting with President Joko Widodo at the Presidential Office, Jakarta , Friday, August 10 2018.

Finance Minister Sri Mulyani Indrawati said that currently, the government has disbursed Rp 37-38 billion according to the request of the National Disaster Management Agency (BNPB) which is used as an emergency response fund. The majority of the fund is used to provide food, drinks and medicine. “That’s just the initial emergency, so just wait for BNPB,” she said.

Meanwhile, the Main Secretary of BNPB Dody Ruswandi said his party generally has funds ready for use (on call) in the event of a disaster of Rp 700 billion. The money has now been used half of it.

But according to him, there are still reserve funds available at the Ministry of Finance amounting to Rp 4 trillion. Dody said the fund could be disbursed at any time. “Available anytime, the finance minister is ready,” he said.

Minister of Public Works and Public Housing Basuki Hadimuljono said the government provided compensation for residents whose homes were damaged by the Lombok earthquake with varying amounts. If their house is slightly damaged, it gets Rp. 10 million, while Rp. 25 million, and weighs Rp. 50 million.

The recipient community, said Basuki, is obliged to implement an earthquake-resistant construction model if he wants to rebuild his house. “It is mandatory, if not, repeating past mistakes with construction which is non earthquake resistant,” he said.

President Joko Widodo or Jokowi in the introduction to the meeting ordered that the evacuation of victims remains a priority. In addition, he requested that residents get comprehensive assistance. “I ask to ensure the availability of logistics, tents, blankets, food, especially food for babies, medicines, water supplies, and electricity-related supplies,” he said.

JawaPos.com – A 7 RS magnitude earthquake that rocked Lombok on Sunday (5/8) night has become the world’s spotlight. Moreover, more than 91 people were declared dead and dozens of others were injured due to collapsed buildings.

Rescue and handling of earthquake victims until this afternoon is still being carried out. Hundreds of tourists were also evacuated from Gili Trawangan, Gili Air and Gili Meno even though conditions were declared safe and free of tsunamis.

Nevertheless, BNPB Head of Center, Data, Information and Public Relations Sutopo Purwo Nugroho said, so far the government has not set an earthquake in Lombok as a national disaster. According to him, the status is not needed, because the local government can still operate.

“It is not necessary (national disaster status). The existing provinces and districts are not paralyzed,” he said at the BNPB Building, Jakarta, Monday (6/8).

Meanwhile, he explained, the emergency response period was effective since the 6.4 SR earthquake also rocked Lombok last week. “So we continue but with more intensive treatment on a larger scale,” he said.

The central government said he continued to coordinate with the local government to deal with victims and local residents. A number of assistance were mobilized, including rescue workers, health, to logistics and clean water.

Until now the government has also not requested international assistance. “The potential of national resources is still sufficient to handle the earthquake. But if a friendly country, a foreign country wants to provide assistance, please,” concluded Sutopo.

BNPB: Smoke Haze Does Not Fulfill All Requirements for Establishment of National Disaster Status

Jakarta – The government has not yet established a haze as a national disaster. The National Disaster Management Agency (BNPB) said the haze did not meet all the criteria that form the basis for determining national disaster status.

“Determining the status and level of disasters as mandated by Law No. 24 of 2007 concerning Disaster Management in the form of a Presidential Regulation has not been determined because in practice it is difficult,” said BNPB Head of Data, Information and Public Relations Sutopo Purwo Nugroho when confirmed on Wednesday (30/9 / 2015).

Sutopo explained, the status and level of disasters are based on indicators that include a) the number of victims, b) property losses, c) damage to facilities and infrastructure, d) wide coverage of the area affected by the disaster and e) the socio-economic impacts caused.

“In practice, this is difficult. For example, smoke disasters caused by forest and land fires are fulfilled to be declared as national disasters? Indicators a, b and C do not fulfill these requirements,” said Sutopo.

Likewise, the landslides that occurred in Banjarnegara in early 2015 caused 110 people to die as exemplified by Sutopo.

“Indicators b, c, d, e also do not meet. Or the Sinabung eruption disaster that many parties want as a national disaster. It turns out that it only fulfills the indicators b and e. It only occurs in several sub-districts in one district. That is what causes the status and level of disasters nationally difficult to make, “Sutopo said.

According to him, the president is authorized to determine national disaster status after obtaining input from BNPB and related ministry ministries.

“In practice Indonesia has only just declared a national disaster during the 2004 Aceh tsunami. It happened because all indicators met. And the most important thing was how the function and potential of the area that existed during the disaster, were all destroyed or still intact,” continued Sutopo.
(fdn / fdn)”. 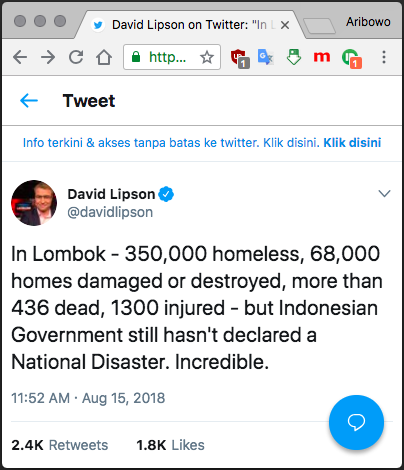 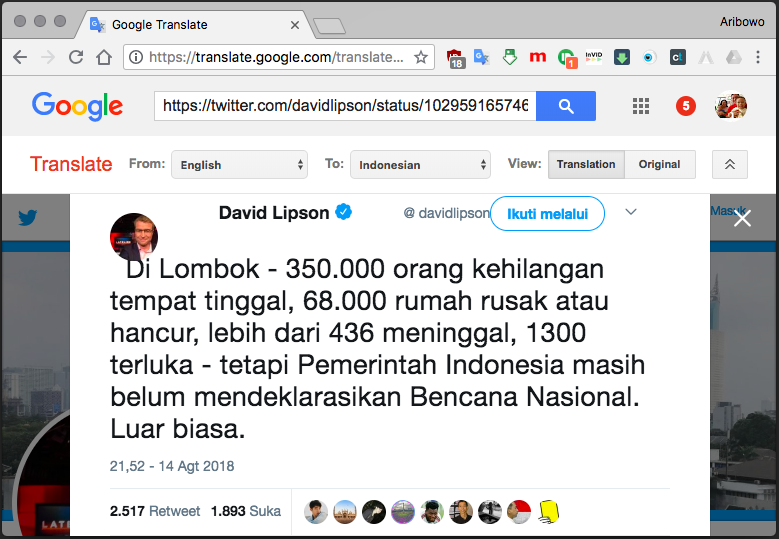 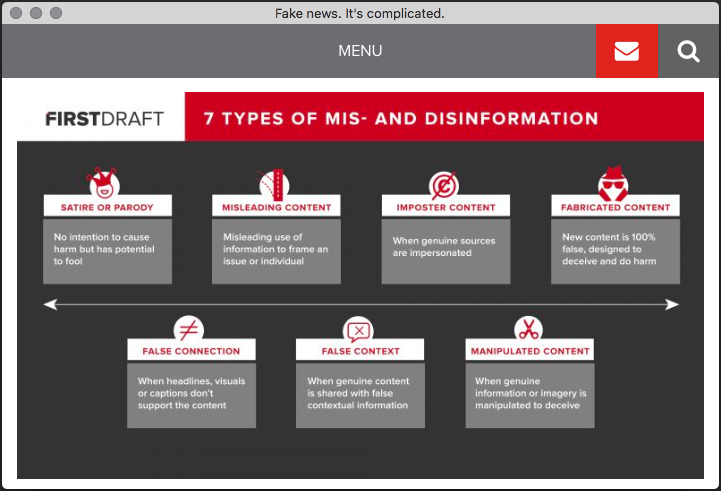 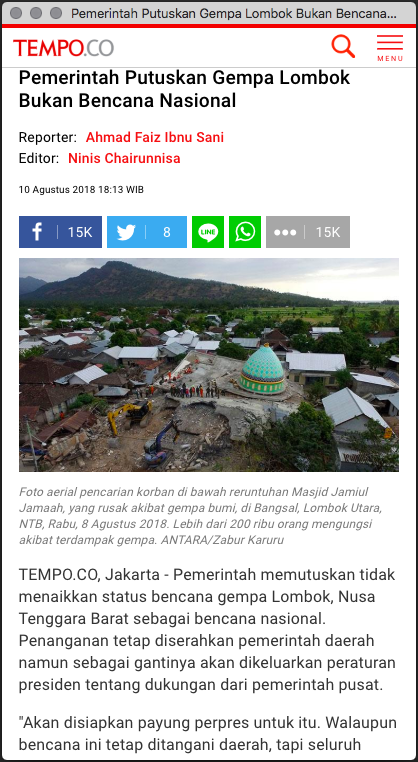 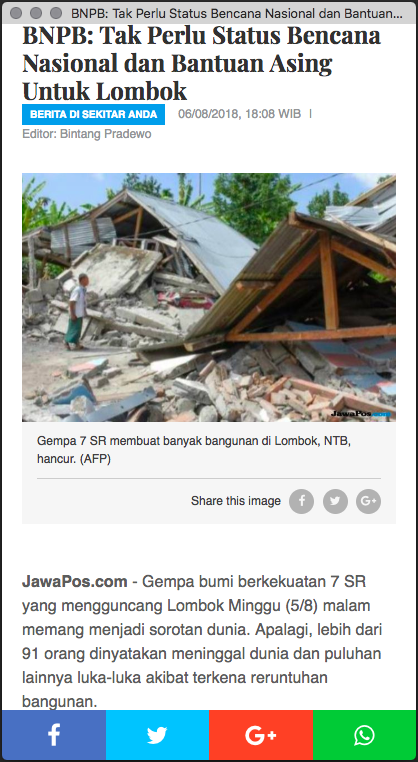