The video attached to the post is video of Fuego volcano eruption in Guatemala, not mount Sinabung in Indonesia. Check EXPLANATION and REFERENCE section for more.

“Indonesia’s Mount Sinabung Volcano Erupted Today and the Photos Are Spooky as Hell
Pictures are disturbing”.

At least 62 people were killed after the volcano erupted Sunday, spewing a river of lava and plumes of smoke almost 6 miles into the air, said Mirna Celedon, spokeswoman for Guatemala’s Institute of Forensic Sciences. Thirteen of the dead have been identified so far.”

Guatemala’s most violent volcanic eruption in more than a century has killed 62 people, officials say.

Dozens more are missing, the country’s disaster agency says, and it is feared the death toll could rise.

Villages on the slopes of Fuego volcano were buried in volcanic ash, mud and rocks during Sunday’s 16-hour eruption.

Pyroclastic flows, which are fast-moving mixtures of very hot gas and volcanic matter, rushed down the mountainside and engulfed villages.

Guatemala’s coast has also been hit by an earthquake though there are no reports of damage so far.

Fuego, about 40km (25 miles) south-west of the capital Guatemala City, spewed rock, gas and ash into the sky.

Sergio Cabañas, head of the country’s National Disaster Management Agency (Conred), said the town of El Rodeo had been “buried”.

Other towns affected include Alotenango and San Miguel Los Lotes. Rescuers are still trying to reach a number of villages.

Temporary shelters have been set up for about 3,000 residents who have been evacuated.

Efrain Gonzalez, who fled El Rodeo with his wife and one-year-old daughter, said he had had to leave behind his two older children, aged four and ten, trapped in the family home.

Local resident Ricardo Reyes was forced to abandon his home: “The only thing we could do was run with my family and we left our possessions in the house. Now that all the danger has passed, I came to see how our house was – everything is a disaster.”

(video)
Volcano survivor: “I think my family was buried”

About 1.7 million people have been affected in four regions. The country’s main airport has now reopened.

Officials have advised people to wear masks as protection against falling ash.

How exceptional was the eruption?
Fuego is one of Latin America’s most active volcanoes. A major eruption devastated nearby farms in 1974, but no deaths were recorded.

Another eruption in February this year sent ash 1.7km (1.1 mile) into the sky.

Sunday’s event was on a much greater scale.

This eruption is one of Guatemala’s deadliest such events since 1902, when an eruption of the Santa Maria volcano killed thousands of people.

Guatemala’s national institute of volcanology, Insivumeh, told people to keep away from the affected ravines as there is a possibility of “a reactivation”.

The institute also warned of the possibility of lahars – when water mixes with volcanic deposits forming a destructive debris flow – which could affect villages and hamlets to the south, south-west and south-east.

What is a pyroclastic flow?

A pyroclastic flow is a fast-moving mixture of gas and volcanic material, such as pumice and ash. They are a common outcome of explosive volcanic eruptions, like the Fuego event, and are extremely dangerous to populations living downrange.

Just why they are so threatening can be seen from some of the eyewitness videos on YouTube of the Guatemalan eruption. In one, people stand on a bridge filming the ominous mass of gas and volcanic debris as it expands from Fuego.

Some bystanders only realise how fast it is travelling as the flow is almost upon them.

The speed it travels depends on several factors, such as the output rate of the volcano and the gradient of its slope. But they have been known to reach speeds of up to 700km/h – close to the cruising speed of a long-distance commercial passenger aircraft.

In addition, the gas and rock within a flow are heated to extreme temperatures, ranging between 200C and 700C. If you’re directly in its path, there is little chance of escape.

The eruption of Vesuvius, in Italy, in 79 AD produced a powerful pyroclastic flow, burying the Roman towns of Pompeii and Herculaneum under a thick blanket of ash.

A team of about 40 of us from mountain rescue were up on the volcano searching for a person who had gone missing last week.

We’d located the body of the missing person and were going to retrieve it when the activity of the volcano increased quite suddenly. We were at a height of about 3,700m (12,000ft) and not far from the crater when we decided to abort the operation and descend.

At first, we thought it had started to rain but then I heard something hitting my safety helmet and I said to one of my colleagues: “This is not rain, these are stones!”

The stones raining down on us started getting bigger and bigger. Some were as big as 5cm (2in) in diameter. We’d already started our descent from the mountain when the ash cloud reached us and day turned into night.

From daylight it went to being as dark as at 10pm. Luckily we were carrying all of our equipment which includes torches and helmets and we also know the volcano very well.

We started to move a lot more quickly. We were also in constant communication with our colleagues at the mountain rescue command post and they kept telling us: “Get out of there! Get down, quick!”

In total it took us three or four hours to reach the command post. Luckily we got away unscathed, just with some bruises from the falling stones.

This really came as a surprise, there had been no alert when we’d set out to search for this missing person.

We only really realised the magnitude of this when we got back down and saw everything covered in ash and bridges destroyed.” 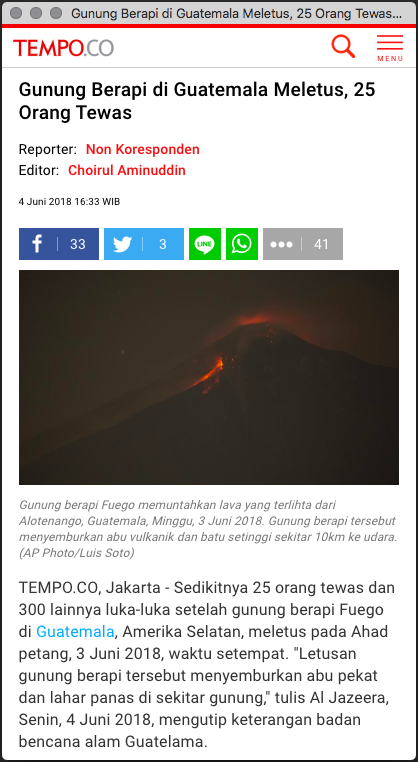 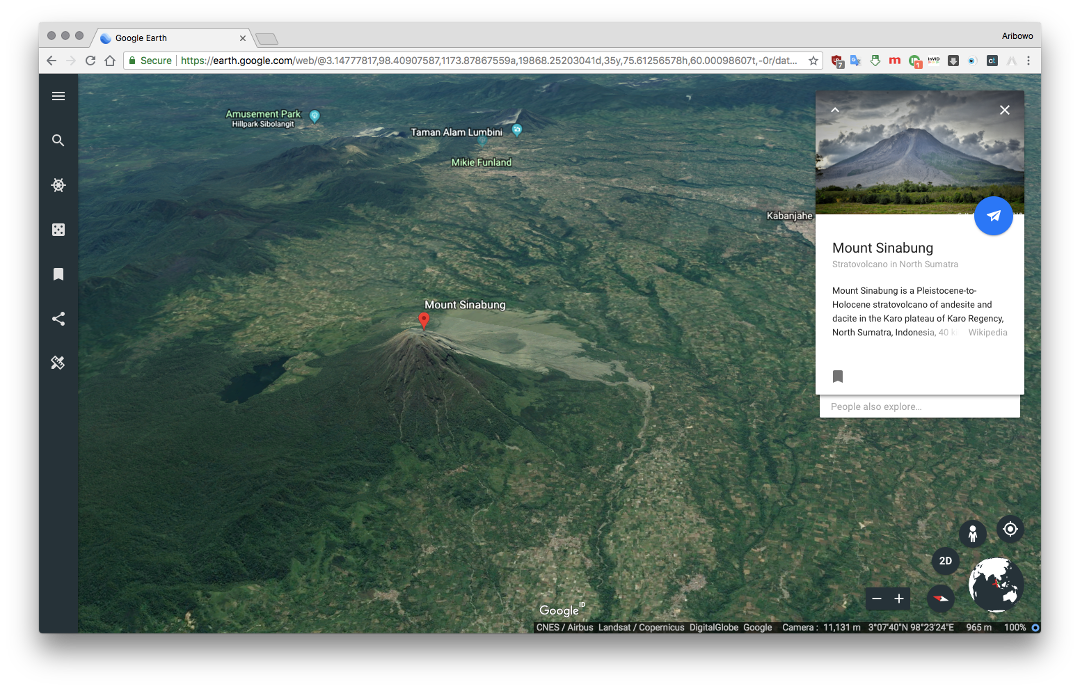 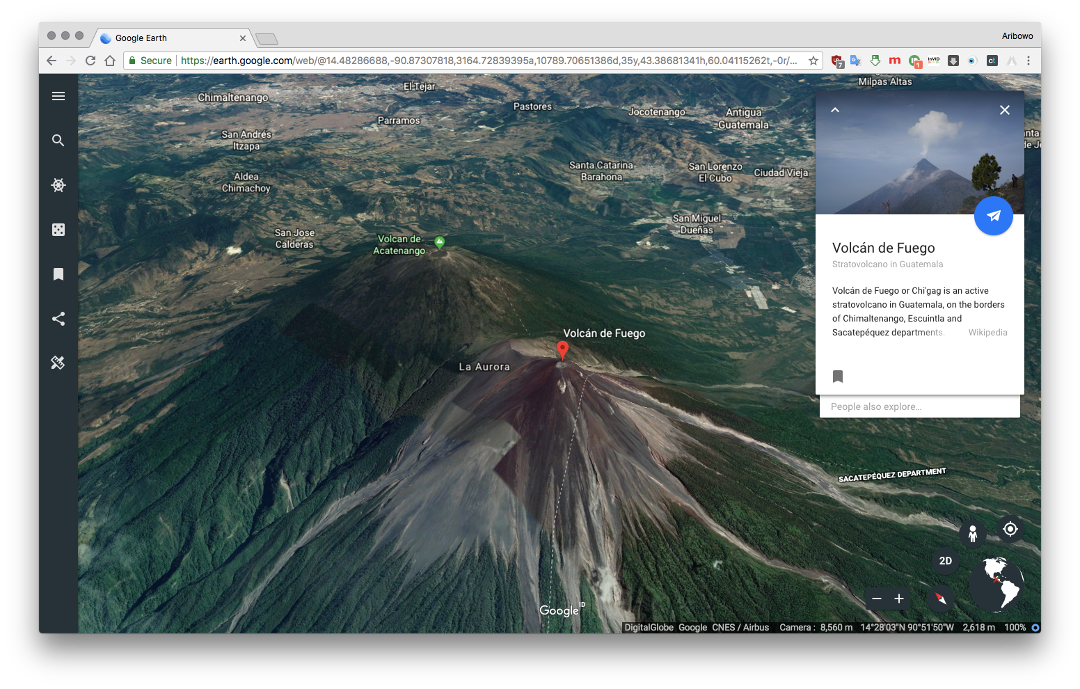