Source of the video > euronews: “Gaza destroys thousands of Snickers bars after mass recall” https://goo.gl/AhdNiV, it was a 2016 news. Impacted products are products with best-before dates from June 19, 2016 to January 8, 2017.

(1) Pertanyaan dari salah satu anggota FAFHH | Question from one of the forum member.

Authorities in Gaza say they have destroyed 15 tonnes of chocolate in response to last month’s mass recall by the manufacturer. Inspectors from the

Authorities in Gaza say they have destroyed 15 tonnes of chocolate in response to last month’s mass recall by the manufacturer.

Inspectors from the economy ministry oversaw the burning of thousands of bars of Snickers in the south of the Gaza Strip.

The move came after bits of plastic were found in a product.

Other brands on the recall list are Milky Way Minis and Miniatures as well as Celebrations confectionery boxes.

The countries involved include Germany, the UK, France, Belgium, Italy and Spain.

MEMBERS of Hamas have been pictured throwing tonnes of Snickers bars onto a bonfire, following a recall by their manufacturer.

Sweet maker Mars announced a recall of its chocolate bars last month, after a piece of plastic was found in a Snickers bar.

The Associated Press reported that Hamas authorities hurled boxes of Snickers bars into a bomb crater today, before dousing them with diesel and setting them alight.

Three children from a nearby Bedouin camp managed to snatch some of the chocolate bars before they melted away.

Sweet maker Mars says it is recalling chocolate bars and other items in 55 countries – including Ireland and Britain – after plastic was found in one of its products.

Roel Govers, spokesman for Mars in the Netherlands, said the recall affects 55 countries but did not provide further details.

The Dutch food safety authority posted what it said was a Mars press release on its website, saying a piece of plastic had been found in a product that could lead to choking.

Also published in English since the SOURCE originated from outside of Indonesia. 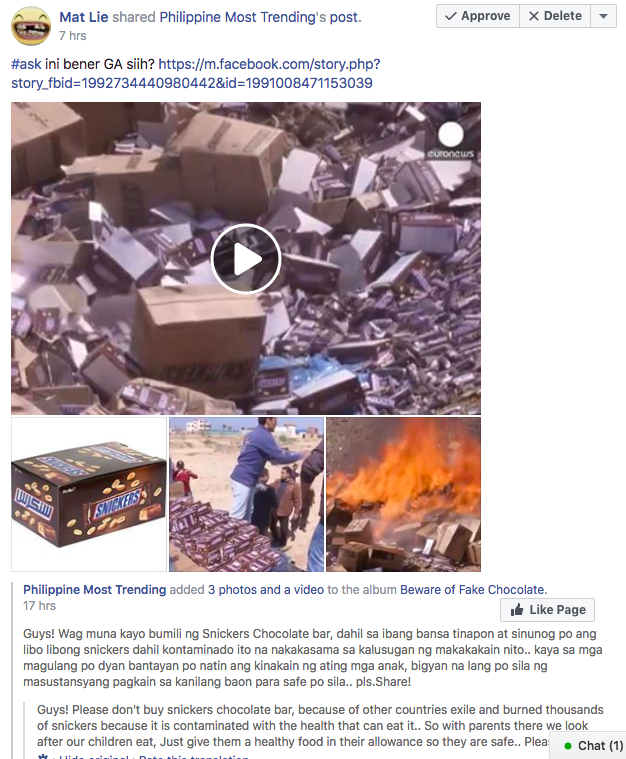 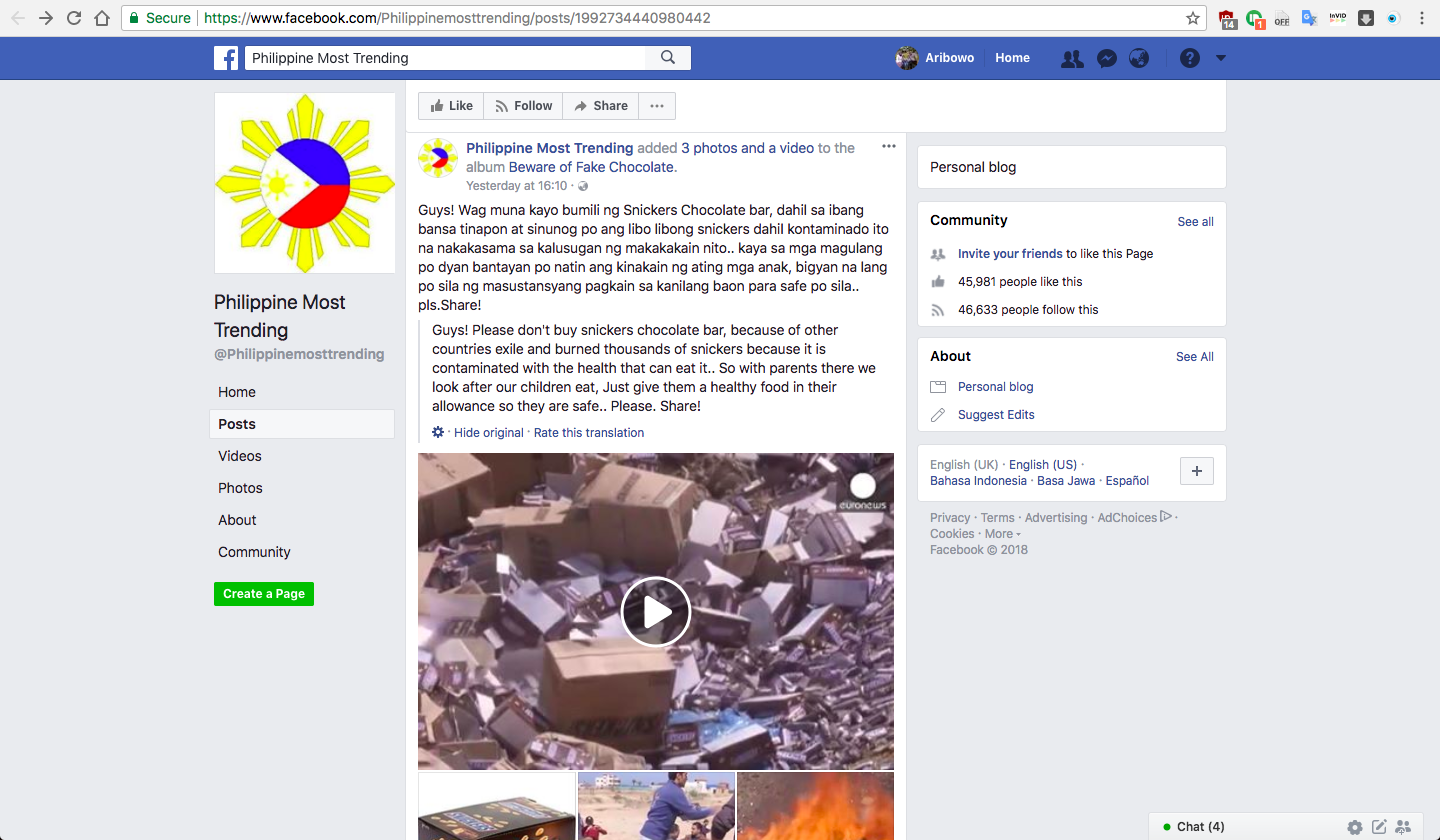 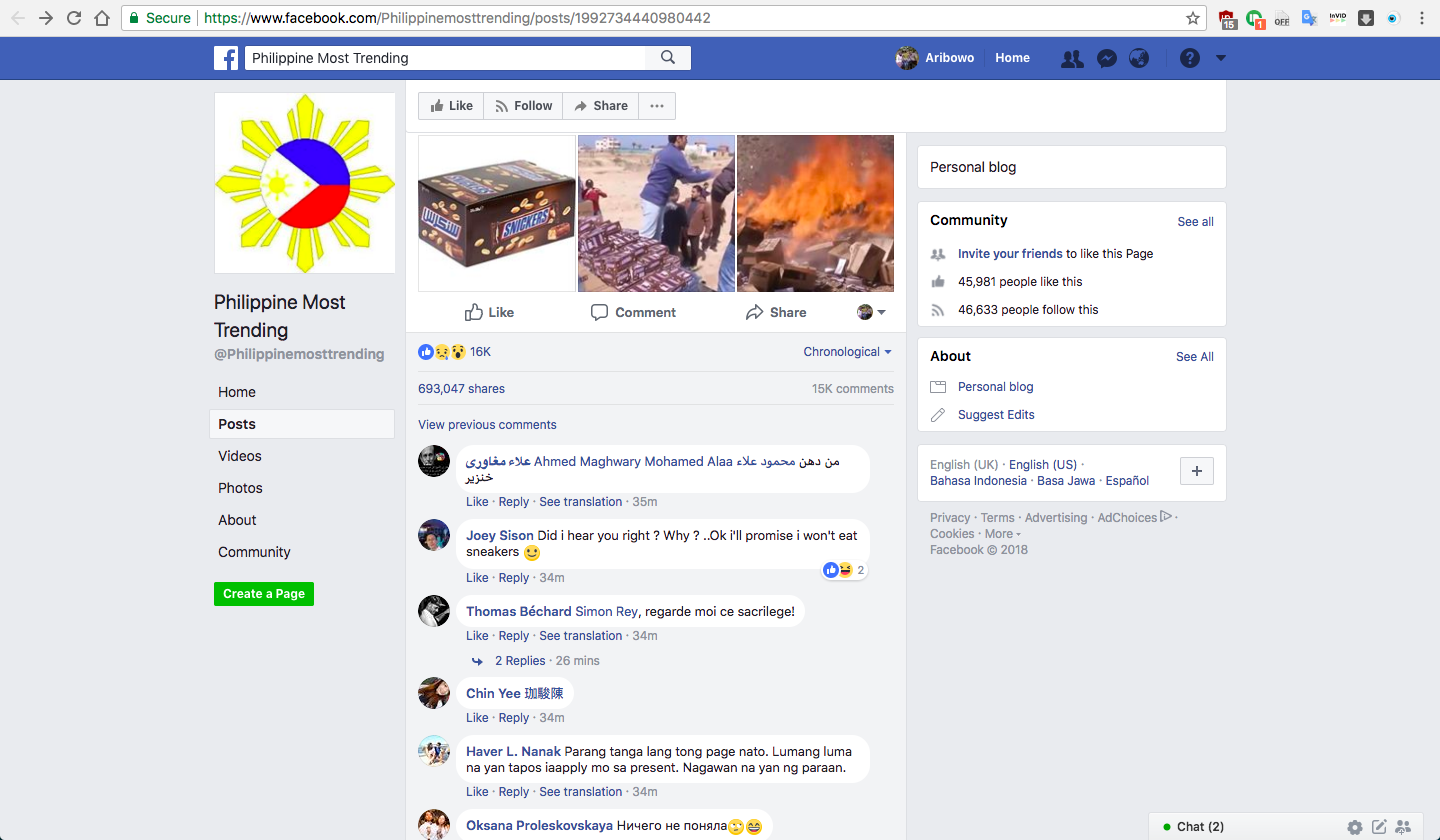 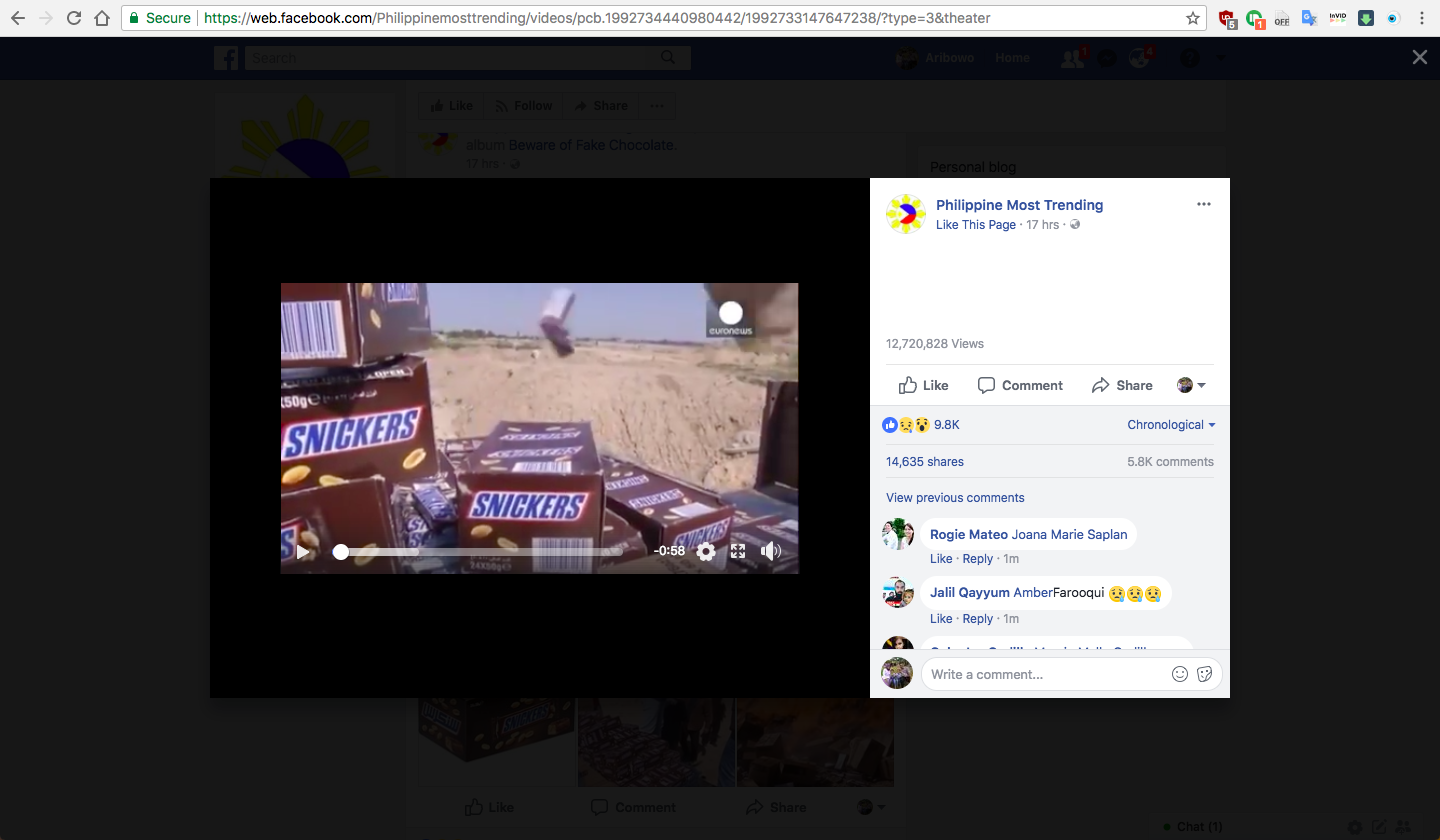 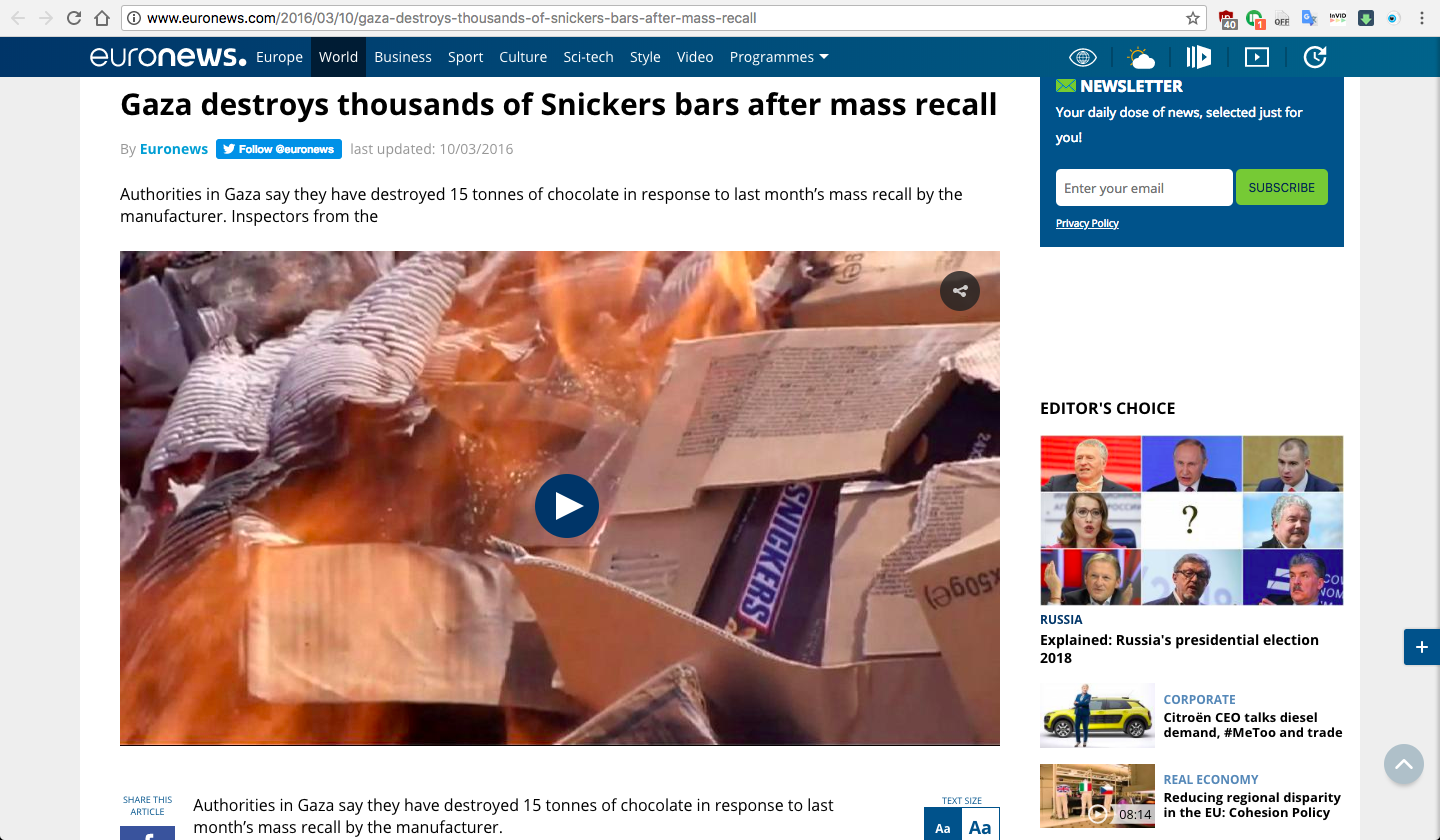 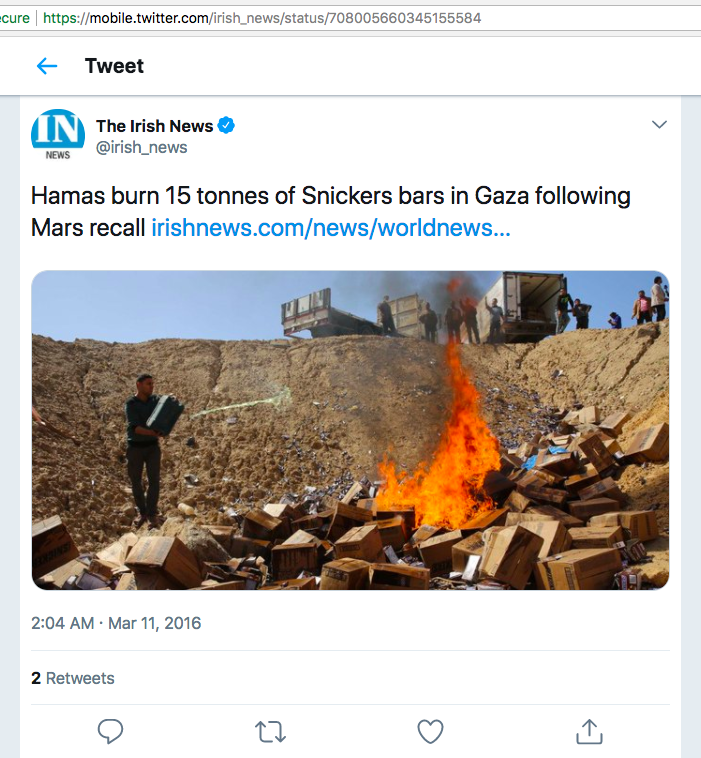 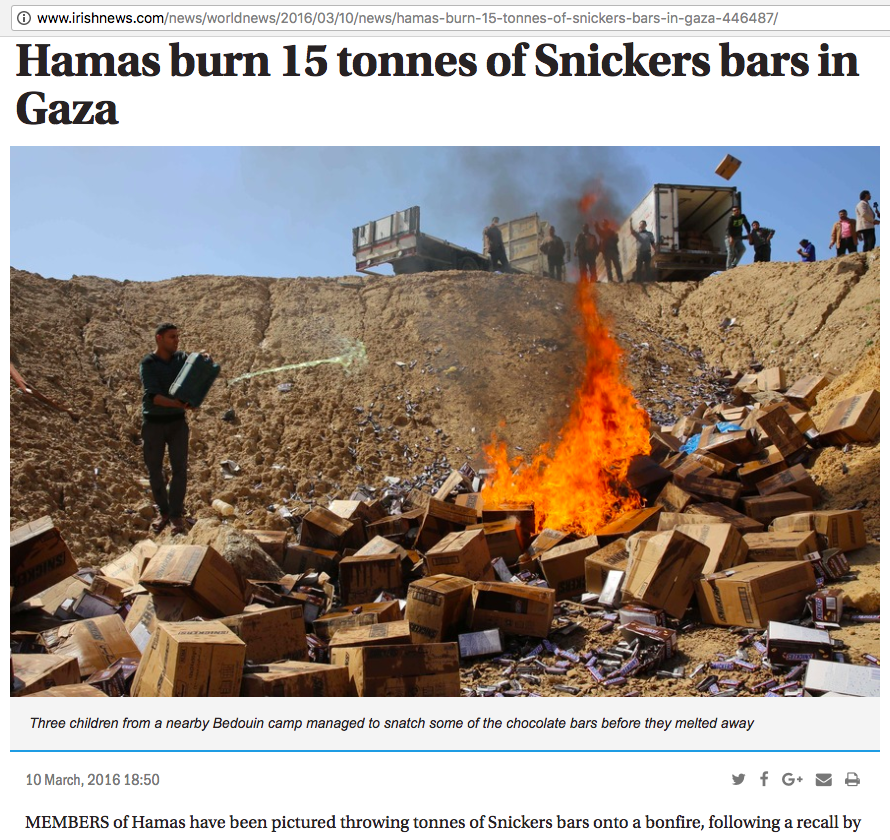